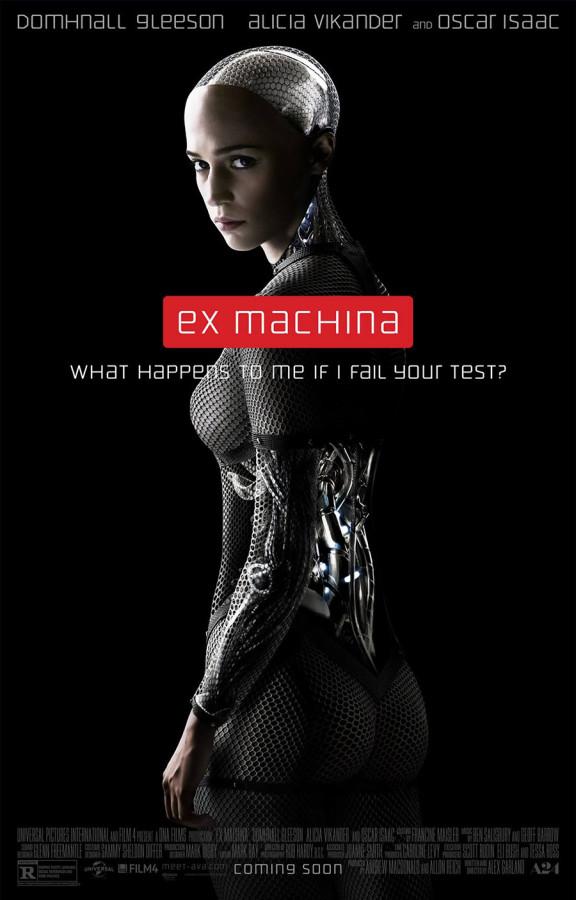 The consequences of artificial intelligence have been a common preoccupation in cinema from “Metropolis” in 1927 to 2015’s “Chappie,” and include some of the most revered science fiction films ever such as “2001: A Space Odyssey” and “Blade Runner.”  Including “Chappie” in this list of well respected science fiction might seem odd, but it is especially topical when compared to Alex Garland’s “Ex Machina,” which was released on April 10.  While “Chappie” is content as everything dissolves, “Ex Machina” is less action-oriented and more focused on exploring notions of human-AI relationships. The latter is much more thrilling and leaves a lasting impression.

Domhnall Gleeson stars as Caleb, a low-level coder who wins a contest to spend a week at the home of Nathan (Oscar Issac), the CEO of his company.  Upon his arrival, Nathan asks him to participate in a Turing test — to determine if a machine has a human level of consciousness and capacity for social interaction, on his latest model of AI, Ava (Alicia Vikander). During one of their six sessions, the power goes out and Ava, aware that Nathan cannot hear them, warns Caleb to not trust him.

Over the next hour, Caleb must choose whom to believe, decide whether or not anything he has been told is true and, in one harrowing scene, whether he is human.

After the first 20 seconds, the story takes place entirely in one location and focuses on only four named characters. This minimalist setup contributes to the heart-pounding tension and overall sense of dread that is more terrifying than any typical jump scare a less experienced filmmaker would have used. When the power cuts out and Caleb is trapped with Ava in a glowing red room with alarms blaring, it is a creepy, shudder-inducing moment. Gleeson is adequate, though sometimes he is unable to sell the occasionally clunky dialogue in the least juicy role of the three main actors. It is Isaac and Vikander who shine, maintaining a mystery and ambiguity in their performances that leaves viewers unsure of who is being truthful.

The film slowly burns in intensity until its chilling climax. Fortunately, Garland avoided the hackneyed directions he could have lurched the story in at the end — the big plot twists are legitimately exciting and unexpected.  “Ex Machina” is a clever sci-fi thriller with intelligent, complex ideas about AI’s impact on human life.

A version of this article appeared in the Wednesday, April 15 print edition. Email Zach Martin at [email protected]