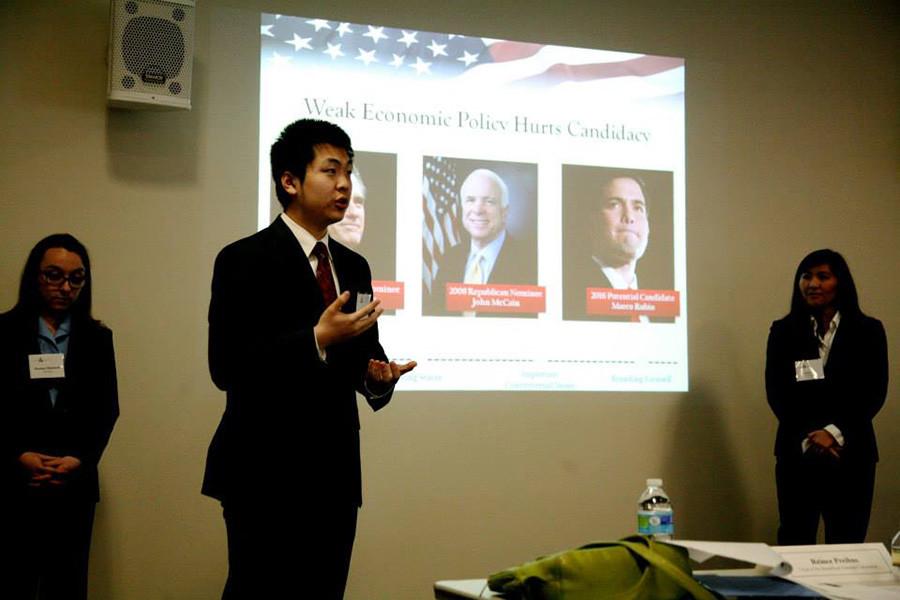 Out of the original 45 teams, only seven were still in the running for the grand prize on the final day of presentations. Finalists presented topics on education reform, ISIS, Chinese economic policy, Greece and the Eurozone, the 2016 presidential campaign and the Russia-Ukraine crisis. Each team was given 15 minutes to introduce their proposals and answer questions from judges.

The winning presentation comprised Stern sophomores Lily Li, Lauren Yee, Joe Wang and Deanna Mostowfi. Their topic was domestic policy, so the team decided to analyze how implementing their proposed campaign strategies would cause Jeb Bush to win the 2016 presidential election.

Yee said the incorporation of the upcoming 2016 presidential election led to the team’s success.

“We stayed up very late perfecting our presentation and taking in the judges’ comments from the first round to create a clear position,” Yee said. “It’s a great experience to take part in speculating what the outcome of the election will be because it will influence United States as well as international policy.”

Each judge was given a different persona to play for each presentation in order to direct their line of questioning. The roles included President Barack Obama, Russian President Vladimir Putin and CIA Director John O. Brennan.

Judge Alex Zeldin said he was impressed with the teams’ dedication to providing solutions to problems that affect lives around the world. Zeldin also said these undergraduates were already innovating and revolutionizing the way we see policy.

“The competition fully embodied the NYU Politics Society’s motto of ‘Rethink, Challenge and Impact,’” Zeldin said. “These undergraduates gave new perspectives and ideas on key issues that powerful players in government are struggling with.”

“Last year’s turnout within NYU was impressive, and I was ecstatic to see so many students from other universities dedicated to policy reform,” Khemka said. “The NYU Politics Society is honored to give college students a way to impact professionals already working on these issues and create immediate change.”