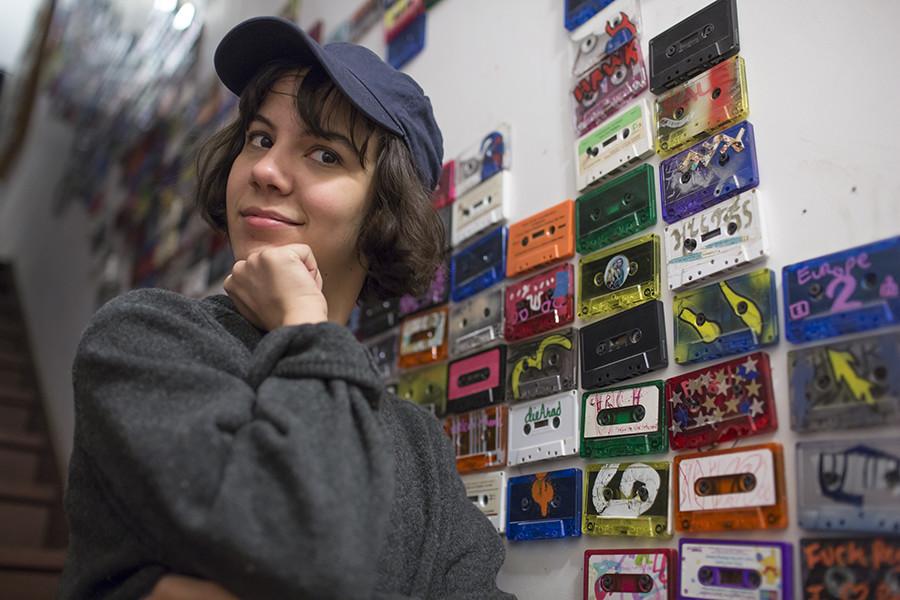 In the front of a lecture hall in the Gallatin School of Individualized Study, Vanessa Castro sits in the center among three other panelists receiving the Gallatin Dean’s Award for Summer Research for Arts and Music. Castro is being recognized for her art show “Recycled Origins,” which used the female form to explore other ideas in artwork in an exhibition at the Living Gallery in Brooklyn in September.

“Gender isn’t something that needs to be used anymore to define these works, because it is still thinking in a binary that separates men from women, black from white,” Castro said of her work. “It’s important to start seeing beyond that to make any step forward in the way we view and understand others.”

This project was just one of many in the works over the last two years for Castro. Since January 2014, she has worked for MoMAPS1 in Queens, an affiliate of the Museum of Modern Art that focuses on contemporary art and culture.

Castro said her job at MoMAPS1, where she began as an intern and now works as a preparator, is extremely hands on. As one of the people in charge of installation, art handling, assisting the Chief of Exhibitions and maintenance of the gallery space, most of her time is physically spent organizing and caring for the artwork.

“As opposed to an administrative job, if I’m doing something like installation, I’ll be walking down the hall and see the work I did there in front of me, which in the end is more satisfying,” Castro said.  “It was the classic rags to riches, internship turns into a paid job situation, which I never thought would happen.”

Castro said her love of art began at a young age — she won first place at art fairs in kindergarten and first grade. She continued her involvement more seriously in high school, during which she organized open mic nights and was interested in band and photography.

Despite her long history with artistic expression, Castro did not always have her eyes set on a future in art and curating.

Castro said that her parents, who immigrated from Brazil, strongly encouraged her and her two siblings to pursue the same kind careers they’d had and to find a more traditional kind of success. Castro originally came to NYU through Stern School of Business to study marketing in the fashion industry. Business school, however, did not provide the creative outlet she was looking for.

“I liked the students I was surrounded by because they were all very hard working and really cared about school — and I really care about school so that was nice — but I just felt kind of grimy,” Castro said. “I just kept having arguments with my professor and he was the director of my department. Then I took an art history class and everything flipped.”

From Stern, Castro switched to Gallatin, allowing her to pursue her love of art and culture, while also incorporating business studies.

Her other creative projects include a curating position at the Silent Barn, a music and arts venue in Bushwick. Every other month Castro collaborates with local artists, musicians and poets to put on an interactive art show that mixes mediums including poetry, visual art and music. Castro said that by incorporating many mediums, she is appealing to her generation’s cultural habit of multi-tasking and need for constant stimulation.

“Think of your Tumblr feed or your Facebook feed: you might be watching Netflix, but you probably have another tab open with three other websites,” Castro said.

Castro curates every show with the audience in mind, striving to create an inclusive environment for artists and non-artists alike. Eliminating exclusivity among art shows is personally important to Castro because of her experience as a second-generation immigrant.

“There is a pressure to do what they brought you to this country to do,” Castro said. “I think it’s led me to have the work ethic that I have, and the reason I care so much about inclusivity, differences and accepting of difference. It is because of my upbringing and awareness of a world beyond the one I physically inhabit.”

Allie Wuest, Castro’s friend since freshman year, said that she accomplishes this in all of her works, transcending the cliques that can develop in artistic communities to strive for inclusivity and a welcoming atmosphere.

“Unlike a lot of people who say they care about diversity but then present white-washed, dude-dominated art shows, Vanessa actually puts in the work to make sure a plethora of identities are represented in her exhibitions,” Wuest said.

Castro is now in the process of curating two shows for Silent Barn: a fundraiser in March that will feature drafts of drawings and paintings for New York City Public Schools to buy art supplies, and a concert in May featuring an all-female band that will encourage women’s empowerment. As with all of her shows, she is working to make these exhibitions inclusive and encouraging to a broader community.

“What is so beautiful about art is it is capable of creating social communities,” Castro said. “Weirdly enough some of these communities can exclude people. I think it’s important to blur those lines and create even a stronger community that not only embraces your friends or specific medium, but one that creates your medium as a whole.” • Larson Binzer