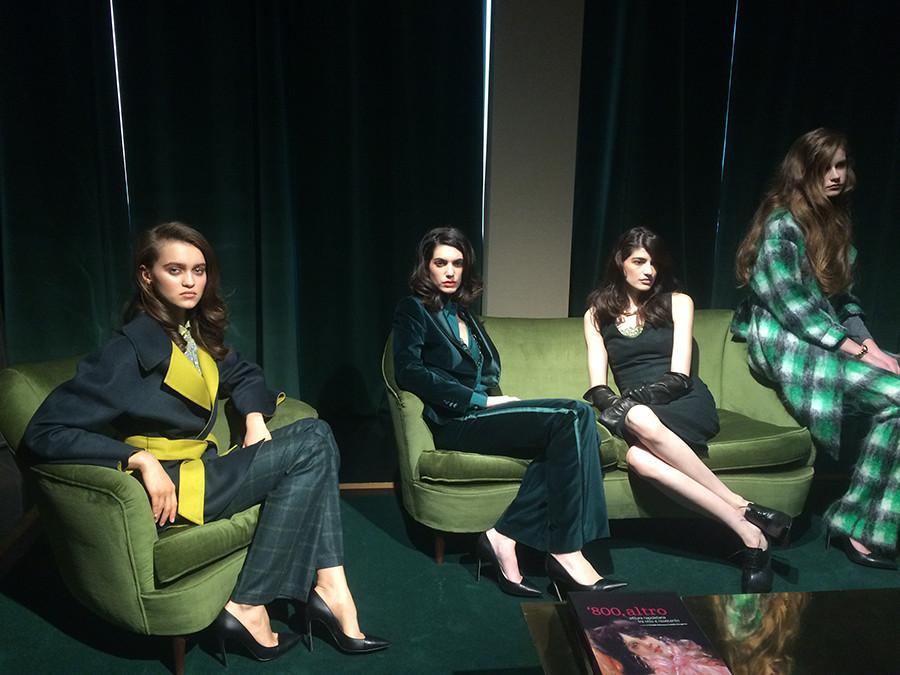 After Fashion Week conquered the New York and London catwalks, it made its way over to Milan from Feb 25 to March 3 to showcase the Fall/Winter 2015 looks. Despite aesthetic differences between legendary Italian fashion houses and newcomers, the embrace of femininity and sophistication was prevalent throughout the week. Whether it was the details and silhouettes of the pieces, the hair and makeup choices or the actual models sent down the runway, MFW’s designers gave their models and audiences the Italian treatment in a celebration of women, diverging from the menswear trend of recent seasons.

Dolce & Gabbana took the theme of celebrating women literally.  All of the looks were ladylike with lace, floral embroidery, pastel hues and hourglass silhouettes. Many pieces even featured prints of children’s drawings and letters to fit the motherhood theme. The fashion house took this theme one step further by featuring models who are mothers. Model Bianca Balti showed off her baby bump in one of the looks, while other models cradled or held the hands of little children in matching ensembles.

In a season where it seemed as though so many designers were harking back to to the trends of the ’70s, Miuccia Prada took her MFW collection another decade back. Prada’s Fall/Winter looks screamed ’60s mod in tailored suits, bright colors and high ponytails. The precise tailoring of Prada’s clothes demonstrated the strength and sophistication of the women wearing them, but her choice to feature them in candy colors with the additions of floral, ribbon appliques and jewels made each look fun and girly. It was the perfect take on an older trend for the modern woman.

This season, Max Mara chose a new path toward understated sexuality, drawing inspiration from Marilyn Monroe. This influence was apparent in their first look, as model Gigi Hadid walked the runway in an oversized camel coat that fell just enough off her shoulder to show the sensuousness the brand sought to exhibit in their collection. The silhouettes were simple and relaxed to create an understated look. The show also introduced menswear inspired pieces, but still kept the looks oversized and comfortable.

Variations in updos were seen throughout the shows. Milan’s runways showcased Fendi’s looks with headbands and loose ponytails, Dolce & Gabbana’s jeweled barrettes and Bottega Veneta’s low knots at the base of models’ necks.

Unconventional eyeliners were also spotted on the Milan runways. Lanvin incorporated the trend in a more subtle way with black kohl liner surrounding the whole eye. Rochas, on the other hand, created thick, black graphic rounded lines over and underneath the eyes and Anthony Vaccarello drew star outlines at the outer corner of the models’ right eyes with navy liquid liner. Milan Fashion Week was clearly a continuation of the ’70s trend and the return to feminine silhouettes that have dominated Fashion Month this season.

A version of this article appeared in the Wednesday, March 11 print edition.  Email Natalia Barr at [email protected]