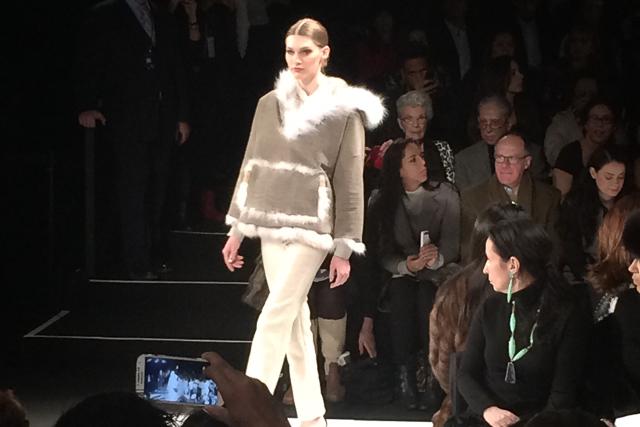 Strong female vocals, including Beyonce’s “Flawless,” blasted through the speakers as equally strong feminine looks from Dennis Basso’s Fall/Winter 2015 collection graced the runway at the Theatre at Lincoln Center. Glamorous jet-setting women of the 70s inspired Basso’s collection, evident through the incorporation of jumpsuits, palazzo pants and halters that took the catwalk in gray, navy, black, scarlet and plum.  Either metallics or Basso’s signature furs were present in every look.

It was said in the show’s program that, “From Jackie O. in Rome, Annabelle’s in London, Regine’s in Paris to Studio 54 in New York, beautiful jet-setting women focused on statement dressing.”

Dennis Basso may have created some statement pieces for his collection, but considering how popular the 70s trend has been on the Fall/Winter 2015 runways, the collection hardly made a statement as a whole. Most of the looks were ensembles that were used in his Fall/Winter collections of the past; long gowns and fluffy furs. He has perfected these looks by carefully mixing elements of modernity and stylishness with elegance and timelessness, but they are nothing new from the designer, and the collection was somewhat predictable from the start of the show.

The looks that perhaps stood out the most in the collection were the very few looks that were not covered up by a fur coat or vest. A hand embroidered plum lamé gown with subtle sequins on the bodice was chic and sophisticated, but still very youthful. A scarlet chiffon gown with a bias cut halter could have also been a statement piece, but was covered up by a chinchilla, fox and wool coat of different shades of red.