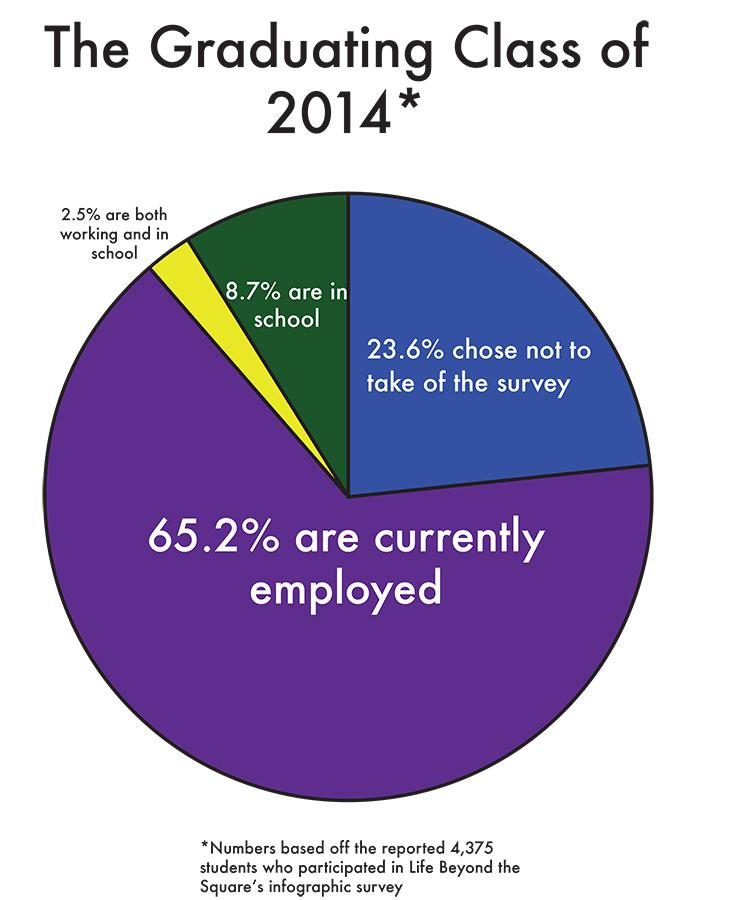 he Wasserman Center for Career Development released their annual report, “Life Beyond the Square,” about the class of 2014 on Jan. 30. Among other statistics, the report said within six months of graduating, 94.7 percent of respondents were either employed full-time — with an average salary of $55,647 — or in graduate or professional school. Almost 4,400 alumni, 76.4 percent of the class of 2014 graduates, responded to the survey.

Stern freshman Jennifer Barba said this news eases her anxiety about life after graduation. She added that the pressure to succeed can sometimes
be overwhelming.

“It makes me feel secure that I am going to a school that has the resources and connections I need to succeed,” Barba said. “Even though I am only a freshman, I worry about my future a lot because NYU is expensive. I often wonder if it is worth it.”

“I currently work as the Community Engagement Coordinator at the GO Project, and I also go to graduate school part time at NYU Wagner for my master’s in public administration and nonprofit management,” Ong said. “Everything I’m doing now has been influenced by my time at NYU.”

Not all alumni share this feeling, though. Josh Qian, who graduated from the College of Arts and Science at the end of the fall 2014 semester, is currently employed full-time at a small digital agency doing software development, but he does not credit the job to his NYU degree.

“NYU didn’t help me with post-grad plans,” Qian said. “I don’t think the name of your school matters in this industry other than maybe with the big companies like Google or Facebook.”

The report said 90 percent of respondents took advantage of the many resources at the Wasserman Center for Career Development.

NYU spokesperson John Beckman attributed these statistics to the range of resources that the university offers.

“I think the figures point to three underlying ideas,” Beckman said. “One, that NYU provides an exceptional education that distinguishes its graduates for recruiters and employers. Two, that one of the great advantages of going to NYU is being able to participate in internships and networking in the world’s capital of commerce. And three, the people in the Wasserman Center do an outstanding job of connecting graduates with careers.”

CAS senior John Valiplackal said he has plans to work as a credit analyst at J.P. Morgan after graduating in May. He said being a student at NYU allowed him to make connections in his industry.

“NYU enabled me to build a valuable network through various internships and meetings throughout my four years here,” Valiplackal said. “Many of the friends I made at NYU were also interested in the financial services industry, which allowed us to practice interviews and bounce ideas off each other.”

Valiplackal added that NYU’s name and reputation helped him in the job search.

“I think the name NYU also carries a lot of weight in the financial services industry, and really any field, as NYU is such a respected institution worldwide,” Valiplackal said.

Senior Vice President for Student Affairs Marc Wais agreed, adding in an email that NYU is a top competitor among American universities.

“Once again our annual placement statistics provide evidence that our students are competing successfully with students from our ivy and peer institutions on all levels,” Wais said.

A version of this article appeared in the Monday, Jan. 2 print edition. Email Alanna Bayarin at [email protected]