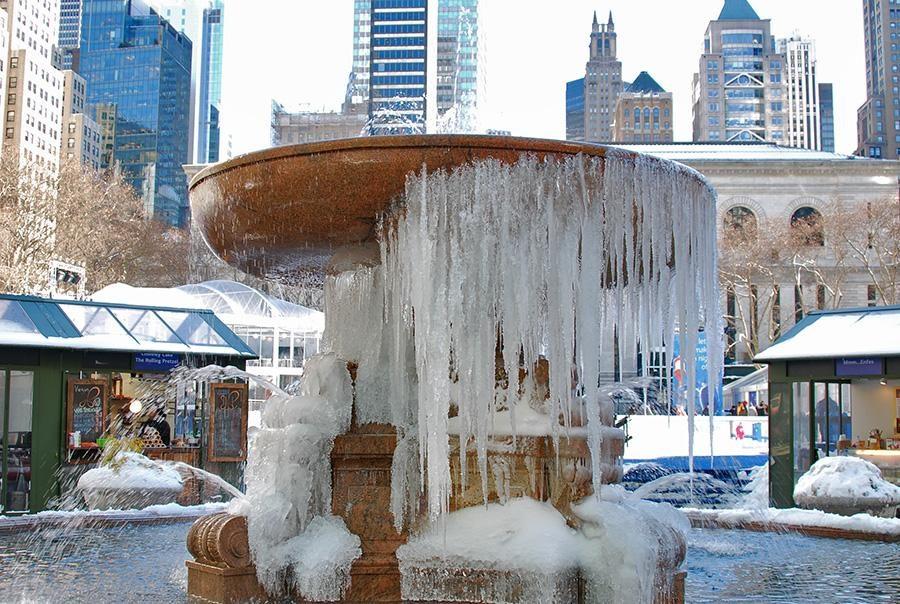 In Bryant Park a fountain freezes over in the cold of winter.

New York City virtually shut down in preparation for Winter Storm Juno, which turned out to be nothing more than a typical snow storm. NYU remained closed after 4 p.m. on Monday, Jan. 26 and all day on Tuesday, Jan. 27.

While the weather forecast predicted 20 inches of snow in New York City, it was reported that snow in Central Park did not exceed 9.8 inches on Tuesday morning. Long Island and New England, however, were hit with almost 30 inches of snow.

Transportation in the city was shut down starting at 11 p.m. on Jan. 26. The New York City subway system closed down for the first time in 110 years.

Members of the NYU community share their views on the university and city closures.

“I don’t think they overreacted at all, because last time we had a blizzard, and NYU didn’t close down, I and many other commuters were forced to choose between doing the safe thing by staying home or trekking through life-threatening conditions to get to school.” — Jadayah Spencer, CAS senior

“Yes, the whole thing was an overreaction, but what if it wasn’t? People could have gotten seriously hurt. I’d rather be safe than sorry. Plus, what is wrong with spending a night inside? I wouldn’t have gone out even if it wasn’t a state of emergency situation. However, if this is a frequent event and it is always overestimated, maybe it becomes a problem not just for student’s pleasures, but also hinders our academic life.” —  Konig Chen, SPS freshman

“The forecast was an overreaction, and so NYU simply made the best decision based on what the weather forecasters said would be coming our way. I also don’t think it was too much for New York City to shut down the subway system for the same reason. In this case nobody can fully predict the weather but it’s better to be safe than sorry.” — Cassidy Edwards, Tisch sophomore

“In a school where a substantial number of students and faculty are commuters, it is never an easy task to get in even with only a few inches on the ground. This coupled with the already announced delays and the fact that NYU was following the advice of every weatherman in the country made it almost not even a question to close.” — Scott Cairns, CAS senior

“Based on how bad the snow was last year, I understand the worry. Unfortunately, because it now looks like they overreacted, I’m afraid the next time there’s a storm in the city they won’t take as many precautions, which could end up being dangerous.” — Nicolette Acosta, CAS senior

“I was glad NYU closed. Although it turned out to be fine it all depends on the accuracy of the weather predictions. Even with a minor possibility of hazardous condition, precautions should always be taken.” — George Maniadis, Tisch sophomore

A version of this article appeared in the Jan. 29 print edition. Email Marita Vlachou at [email protected]