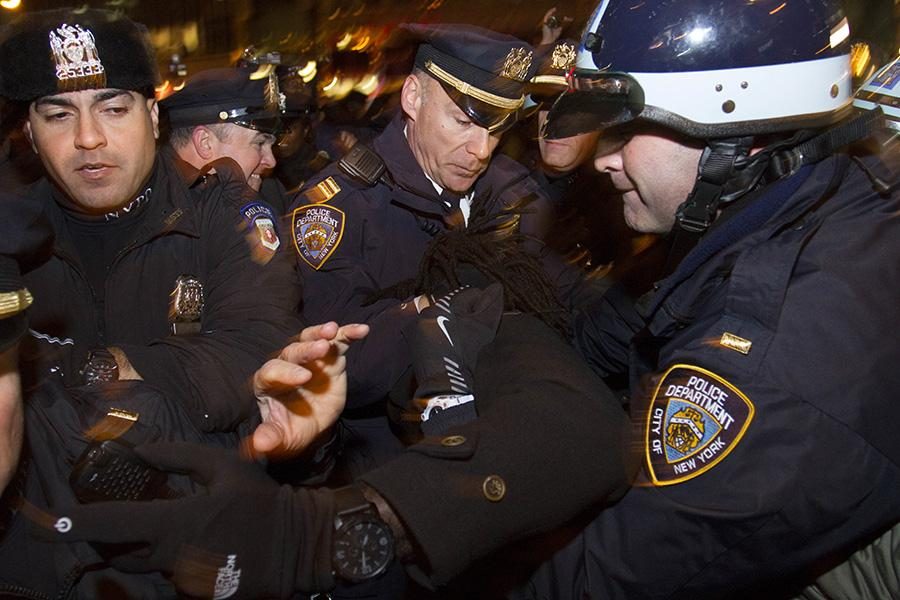 Protesters took to the streets on Dec. 3 following the Richmond County grand jury’s decision to not indict New York police officer Daniel Pantaleo for the death of Eric Garner. Protests were staged in several cities across the country, including New York City, Los Angeles and Ferguson, Missouri.

Pantaleo choked and killed the African-American man in July for allegedly illegally selling cigarettes on a Staten Island street corner. The decision comes on the heels of a Missouri grand jury’s lack of indictment for the police officer who shot and killed 18-year-old Michael Brown in Ferguson.

The grand jury began hearing evidence for the case on Sept. 29, with deliberations beginning this week. The incident was documented on a widely viewed video, which shows Garner being taken down and put into a chokehold by Pantaleo. In the video, Garner’s final words can be heard: “I can’t breathe.”

Hours after the announcement was made, Mayor Bill de Blasio expressed his support of the protests, providing they remained peaceful.

“Today’s outcome is one that many in our city did not want,” de Blasio said in a statement on Dec. 3. “All of us must work together to make this right — to work for justice — and to build the kind of city — and nation — we need to be.”

Despite this, de Blasio cancelled his appearance at the annual Christmas tree lighting at Rockefeller Center, which protesters attempted to disrupt.

Following the grand jury’s decision, Attorney General Eric Holder announced the Justice Department would launch a federal civil rights investigation into the death of Garner. President Barack Obama also addressed the nation, saying there needs to be a rebuilding of trust after so much recent friction.

Hakeem Sackes-Bramble, a 21-year-old demonstrator in New York and former NYU student, said the decision felt close to home because it could have been him in Garner’s place.

“If someone was choking you, would you not resist?” Sackes-Bramble asked. “How are they going to try to tell somebody not to resist and choke them at the same time?”

Many expected charges for Pantaleo, as the video showed Garner resisting arrest but being nonviolent. New York City protesters staged movements in Grand Central Station and Times Square, as well as movements that shut down West Side Highway and streets by Central Park. Multiple demonstrators were arrested at Times Square.

Pace University freshman Britt Baker said she was tired of her fellow citizens being killed for her privilege. She continued to say there are internal problems with the system that needed to be fixed.

“The system won’t change unless we do something,” Baker said. “We need to take our government back.”

Patrick Waldo, a 27-year-old at the protests, said he was glad to see people protesting the decision, and is confident the outrage would not be swept under the rug.

“I do think there will be change and people are so fed up that the federal government will come in and indict him on civil charges, and I hope that happens,” Waldo said. “But if they don’t, the very least we can do is let our opposition be heard.”

A version of this article appeared in the Thursday, Dec. 4 print edition. Email the news team at [email protected]