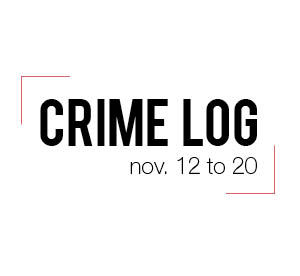 The NYU Department of Public Safety received reports of 15 incidents of larceny, three incidents of controlled substance and one incident of harassment between Nov. 12 and 20.

At 2:15 p.m. on Nov. 16, a student reported that his bicycle was missing when he returned to the bike rack on Eighth Street and University Place at 2 p.m. after having left it unattended the day before at 5:30 p.m.

A student stored an envelope containing money in her Founders residence hall room on Oct. 27. She reported it missing at noon on Nov. 17 when she checked to make sure it was still there.

At noon on Nov. 19, a student reported that his bicycle frame was stolen between 9:30 a.m. and noon from the bike rack near 721 Broadway.

At NYU Florence, a student left 200 euros in her nightstand on the night of Nov. 18 and discovered they had gone missing the following day. She reported the money missing to Public Safety at 9:30 a.m. on Nov. 20.

All but the incident at NYU Florence are still under investigation.

At 9:28 a.m. on Nov. 13, Public Safety confiscated a small amount of marijuana from a dorm room at Lafayette Street residence hall.

At 5:15 p.m. on Nov. 13, Public Safety and Resident Life staff confiscated a small amount of marijuana from a dorm room at Brittany residence hall.

At 9:45 a.m. on Nov. 19, Public Safety confiscated a small amount of marijuana from a dorm room at Coral Towers residence hall.

All of the incidents have been resolved.

At 1:55 p.m. on Nov. 14, public safety received a report from a staff member that said two of his or her co-workers were involved in a physical altercation at the NYU Bookstore.

This incident is still under investigation.

A version of this article appeared in the Monday, Nov. 24 print edition. Email Christine Park at [email protected]