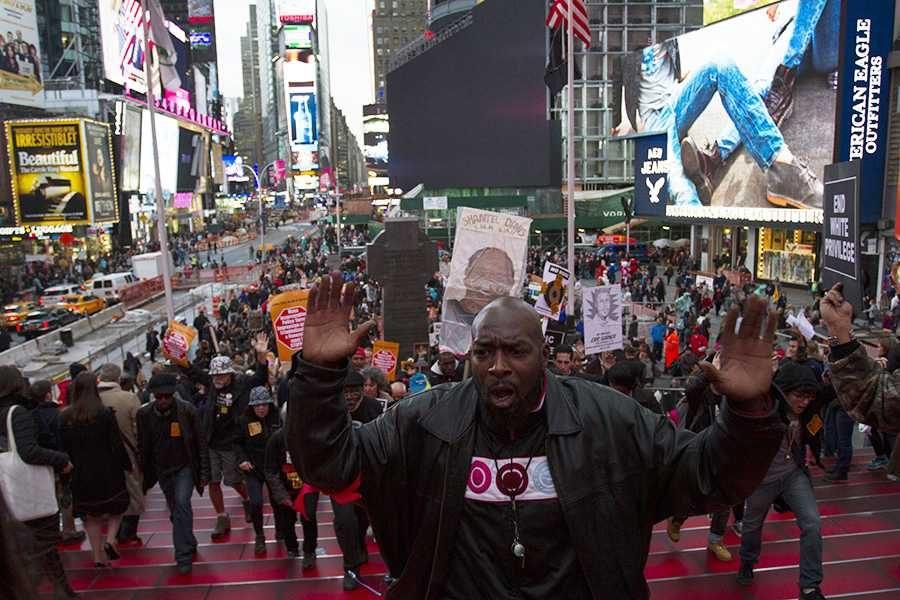 A man leads the Oct. 22 Day of National Protest up the steps in Times Square.

Several hundred protesters marched from Union Square to Times Square to speak out against police action and mass incarceration on Oct. 22.

Protesters gathered in Union Square, where organizers initiated a call and response from the bed of a pickup truck. The protesters then followed the truck to 39th Street and chanted slogans like “Hands up, don’t shoot.” The mass action was part of a National Day of Protest against police brutality. It was the 19th annual day of action and featured demonstrations in around 80 cities nationwide.

Labor and political organizer Stan Williams, 32, said he went to the march to support those who died at the hands of police violence, their families and the incarcerated.

“I’m standing here today in solidarity, and I’m marching to try to end it,” Williams said.

The O22 Coalition and the Stop Mass Incarceration Network organized the event and could only secure a permit allowing protesters to march to 39th Street. When the march reached that point, protesters continued marching to rally in front of the Times Square police station on 43rd Street.

Jogging past 40th Street in an effort to catch up with the front of the advancing crowd, protest organizer and recent NYU graduate Paul Funkhouser said the limited permit would not stop the protest.

“They’ll try to intimidate people, but they’re not going to stop us with force,” Funkhouser said.

The march rallied again at the red steps in Times Square before continuing back to 39th Street to rejoin the truck that led the protest, which the New York Police Department prevented from advancing to Times Square.

Former NYU student Lucy Parks, who helped organize NYU students to come to the protest, said the march was important because police violence has not stopped since the Michael Brown and Eric Garner killings.

“That’s all been going on for so long that finally it’s about to boil over and I think it is really important for everyone to be out in the street,” Parks said.

Parks drew on her experience working with activists at Rikers Island, New York’s main jail complex, over the past summer to explain her involvement in the movement against mass incarceration.

“People die at Rikers Island just because of neglect, or they don’t get the medical attention they need,” Parks said.

Gallatin senior Caitlin Brimmer, who studies urban social movements, said she went to the march because she has seen and worked on cases of police brutality. She said the United States disproportionately imprisons black and hispanic youth.

“The mass incarceration system is absolutely insane, and it directly affects youth of color more than youth like myself and I think that is ridiculous,” Brimmer said.

CAS junior Davis Saltonstall said the march was an issue of solidarity against police violence across the country.

“It is really important for those movements to talk to each other and support each other in order for the movement to have any true meaning and effect,” Saltonstall said. “We need to stand with Ferguson.”

A version of this article appeared in the Thursday, Oct. 23 print edition. Kevin Burns is a senior editor. Email him at [email protected]