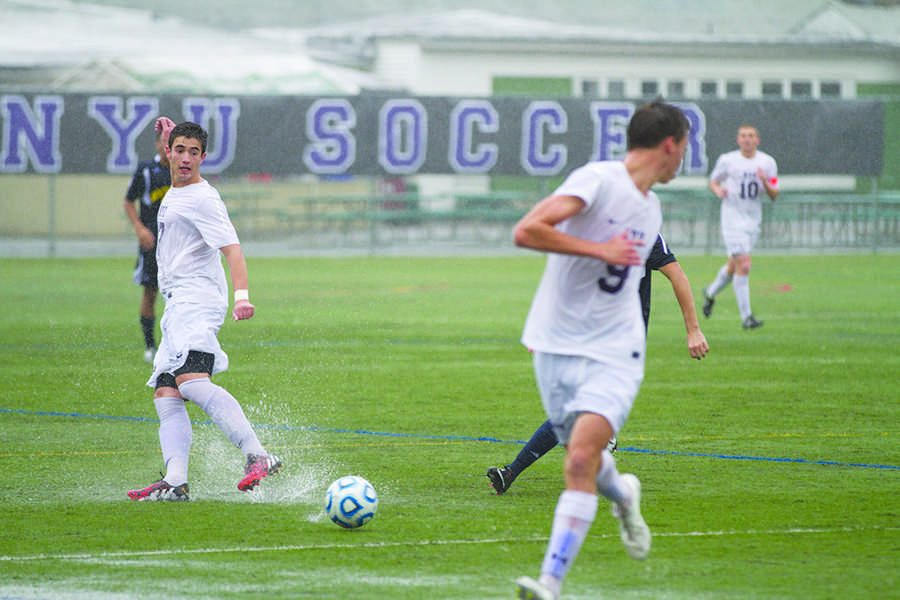 For the NYU men’s soccer team, the sounds of the Auld Triangle carry a symbolic meaning.

Sophomore goalkeeper Luca Doucette said the team sings it on the bus ride after they win a game.

They did just that following the 2-0 victory over the University of Rochester in its first UAA contest. Two goals in the span of three minutes gave the Violets a comfortable lead after a 0-0 score at halftime. Sophomore midfielder Ryan Cerqueira scored the first goal of his career in the 52nd minute, and freshman midfielder Liam Stimpson followed suit in the 55th minute.

NYU controlled a mostly quiet first half, with freshman forward Nicolas Notaro threatening Rochester with a few promising attacks. He had three shots, one on goal requiring a save from UR keeper Michael Shatkin. However, none of NYU’s attacks were successful in the first 45 minutes. UR had a tough time getting any attacks, and Doucette was only needed for minimal duty in the first half.

NYU’s many chances finally snowballed into a goal in the second half. Cerqueira netted the Violets’ first goal off an assist from playmaking Notaro. Before UR had time to breathe, the Violets were back on the board again, when Stimpson put away his team-leading sixth goal of the season, unassisted.

Stimpson has been on fire lately, capitalizing once again on the opportunities that NYU’s potent offense has been creating. His Saturday goal comes after a dominant hat-trick performance in the Violets’ 7-0 win over Farmingdale State College Sept. 30. He now has four goals in the last two matches.

Doucette was impressive in the second half, facing more shots and standing tall throughout. Doucette finished the game with eight saves, improving his mark between the posts to 6-1-0.

“It was awesome winning against a team we lost to 3-0 last year,” Doucette said. “We have a lot to prove this year after our season last year, and Rochester was our first real test this year.”

The win takes the Violets’ record  to an impressive 9-1-0. It also represents an important win in their first game of UAA play, in which the team plays a string of matches against teams in its conference.

While the team looks strong with a home record of 6-0, the Violets will need to keep their momentum and continue to improve throughout the season as the playoffs draw nearer. The fact that they have been getting contributions from all over the pitch this season is promising. They have put up 26 goals in 10 games this season, including 17 in the second half of the season. Furthermore, no single player has more than six goals, a testament to the balanced offense and team approach they have used and will continue to use going forward.

The team will travel across state lines to square off against New Jersey City University on Oct. 7 as they look to pick up their 10th win of the season and keep the Auld Triangle alive.

A version of this article appeared in the Monday, Oct. 6 print edition. Email Bobby Wagner at [email protected]