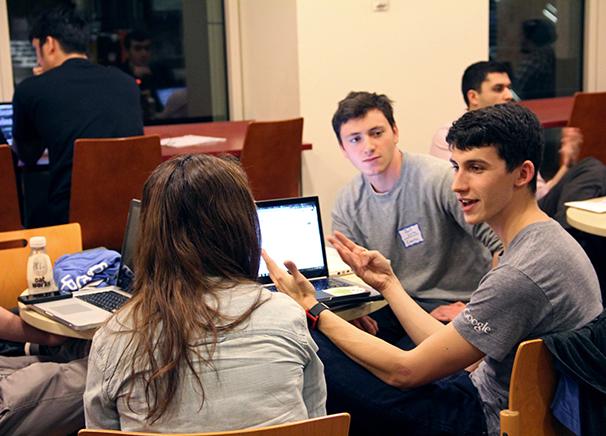 Students and faculty are trying to raise awareness about surveillance in the United States.

The Student Net Alliance, an organization started by Steinhardt senior Alec Foster, has supported a letter from NYU Students and Faculty in protest of the National Security Agency’s surveillance policy. The letter was drafted by Gallatin sophomore Luc Lewitanski, and CAS freshmen Hannah Weverka and Tommy Collison, a group known as the Defenders of the Internet.

The letter, the first to be released in a nationwide effort, is part of the Students Against Surveillance campaign, which launches today.

The letter expresses concerns toward individual surveillance, and also the larger impact of surveillance on a community, such as a university.

“Even if we aren’t all being individually observed, we are compelled to act as if we are,” the letter says. “We have a right to free spaces such as universities where we can explore ideas and experiment without fear of retribution. We have a right to live in a society free of the need to self-censor.”

In its letter, the SNA calls for university members to unify and protest against NSA policies.

“We protest the U.S. surveillance state and the chilling effects it has on our campus life,” the letter says. “We call on the U.S. government to bring the NSA back within the bounds of the Constitution.”

“I signed the letter because I believe that political debate is crippled when individuals can’t communicate anonymously,” Resnick said. “Pervasive, warrantless surveillance robs us of that ability.”

CAS freshman Justine Morris said she signed the letter because she sees its potential to provoke discussion about surveillance.

“Before coming to NYU, I was not aware that mass surveillance was affecting me. I thought it was something that happened only to terrorists [and] enemies of the state,” Morris said. “The letter cuts through a lot of the misdirection of the mainstream media regarding surveillance.”

“I personally don’t really care if the government is spying on me because I know I’m not doing anything they would care about, but it is concerning that they decided to spy on their citizens illegally,” Blume said.

Originally launched to create a unified student voice against NSA surveillance, the SNA has now expanded to about 30 universities nationwide.

“I had the idea to create the Student Net Alliance after observing that there was no cohesive student voice in the mass surveillance or net neutrality debates, and that any attempts to develop such a network were limited by the reliance on traditional chapter-based organizational models,” Foster said. “However, we strive to represent the interests of our educators, alumni and supporters, as well as students.”

The SNA also plans to reach more interested students by holding an international conference in the summer of 2014.

“Hundreds of young people will converge in San Francisco for a weekend of training, expert presentations, workshops and networking with students from around the world,” Foster said. “Our keynote speakers and panels will include experts in cyber security, Internet policy reform, activism and programming.”

In addition to listening to speakers and attending panels, participants will be able to meet with students from their university and discuss goals for the year.

Foster said he hopes the conference will empower students to take action and give them the necessary leadership skills to be effective activists.

“I hope that students leave the conference with a plan to directly impact Internet and technology policy in their universities and governments, a set of skills to amplify and accelerate their actions, a professional network of like-minded student leaders and a greater appreciation for the Internet as a democratizing force,” Foster said.

A version of this article appeared in the Tuesday, April 29 print edition. Valentina Duque Bojanini is a deputy news editor. Email her at [email protected]

*Correction: A previous version of this article did not credit the Defenders of the Internet with the drafting of the letter and instead credited the SNA.