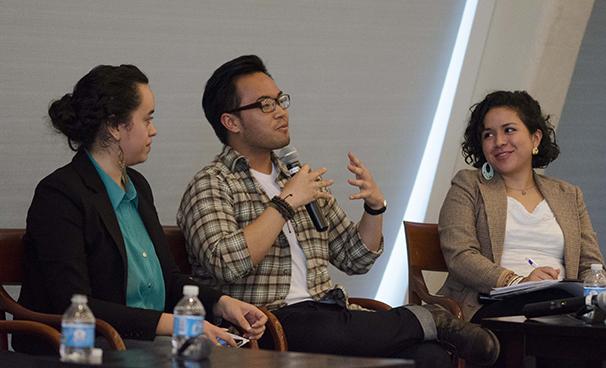 Students and faculty gathered in the Kimmel Center for University Life’s Rosenthal Pavilion on April 18 for “Undocu (stories): A Call to Action” — the closing event of NYU’s fourth annual Ally Week.

“Undocu (stories)” capped off a week filled with workshops and training sessions meant to deepen students’ understanding of societal injustices, as well as ways they can help advocate for marginalized groups.

Assistant Director of NYU’s Center for Multicultural Education and Programs Selima Jumarali said she wanted this closing event to have a learning opportunity.

“I think focusing on one lens of allyship was the perfect close, so people who didn’t know about undocumented issues could come to learn,” Jumarali said.

The students educated the audience about the difficulties undocumented individuals face in a discussion.

“When I was growing up, my mother never wanted us to go into the DMV or any government building,” Rivera said. “You just always live in fear of deportation.”

Gutierrez said many undocumented people who are also queer frequently live in fear that they will be sent back to a country where their sexual orientation means prosecution.

Each panel member has actively worked to eradicate these fears by advocating for healthcare and financial aid for undocumented individuals.

This was the first year that the DREAM Team’s initiative was incorporated into NYU’s Ally Week.

“We’re really happy to be included and its great that conversations about allyship are becoming more inclusive of different communities,” Putterman said.

These workshops focus on teaching students about the issues that affect certain marginalized groups and on how they can help.

“The Zone trainings are really our staple programming during Ally Week,” Director of NYU’s LGBTQ Student Center Celiany Rivera-Velázquez said. “Because in order to be an ally, you need to know how to be an ally.”

Rivera-Velázquez explained that Ally Week was created four years ago with the goal to give students the resources and education to enter allyship as well as rejuvenate people who have been working to be an ally for a long time.

Jumarali encourages students to come to CMEP and the LGBTQ student center, step out of their comfort zones, expose themselves to different cultures and communities, and help these centers create a better platform to assist more students in becoming allies.

A version of this article appeared in the Monday, April 21 print edition. Kristina Thomason is a contributing writer. Email her at [email protected]