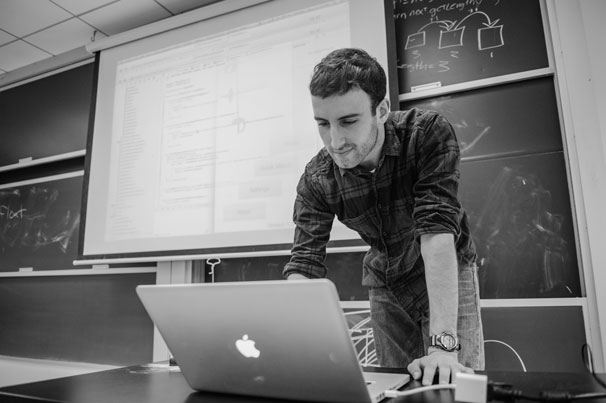 Teaching Assistants can be an essential component of lecture classes, granting students the opportunity to ask questions and discuss course content in a more personal setting.

Mike Jaoudi could be a very popular man around campus if he wanted to be. The CAS junior and computer science major is the creator of NYU Bus Tracker, an app that has made travel more convenient for many students by providing real-time locations and departure times for all NYU buses.

Despite sharing such an innovative idea with the NYU community, the Pennsylvania native demonstrates a level of modesty that contributes to his kind demeanor. Even when Jaoudi sees people using the app he created, he tends not to say anything.

“I’ll talk to people about it, but I won’t tell them I made it because I’m curious what people’s feedback is,” Jaoudi said.

Jaoudi’s passion for app design began with the advent of the iPhone. His first breakthrough was FencingRef, a software that helps fencing referees score matches electronically rather than scribble results on a sheet of paper.

“I had no idea what I was doing,” Jaoudi said. “I still have the code for it. Looking back on it makes me want to cry.”

Despite his disappointment with how the app was originally designed, Jaoudi recognizes its importance as a stepping-off point.

“I needed to actually just start and work from that place, which is good because sometimes I’ll find myself psyching myself out and thinking that this has to be perfect from the get-go,” he said. “But really, you just have to get something and from there you can start working and perfecting.”

But Jaoudi does not want to keep his talent to himself — he also has an intense passion for teaching. For the past three summers, Jaoudi has taught various courses at iD Tech Camps, hosted by Princeton University.

“There’s no doubt that teaching benefits me, but I also just really enjoy teaching others and watching them grow and explore,” Jaoudi said.

He has taught his students everything from basic programming to app and game design, fueling the campers’ creativity and boosting their confidence. Watching their imagination come to life is one of the aspects Jaoudi values most about the teaching experience.

No matter what path Jaoudi goes down in the future, he said he hopes to continue teaching in some capacity. Jaoudi’s wild enthusiasm makes it clear that he has a genuine love for helping others grow to reach their full potential. But, Jaoudi recognizes that he himself still has room to improve — teaching forces him to constantly evaluate himself and ask, “Do I really know this?”

“It helps you get a real understanding of something, not just at the surface level,” he said.

CAS senior Jessica Korsgaard, a friend of Jaoudi since his freshman year when they were both NYU fencers, has firsthand experience with his instructional abilities.

“There have been several times where I have asked him for advice regarding computers, apps and phones,” Korsgaard said. “He never seems bored or annoyed but instead seems happy to help.”

Tyler Palsulich, a CAS senior, who worked on the bus tracker with Jaoudi, echoed Korsgaard’s thoughts.

“Mike is a great guy to work with,” Palsulich said. “We’ve done several projects together, and Mike is always an essential part of the team.”

NYU has also played a role in Jaoudi’s development both personally and professionally.

“NYU has helped me incorporate other interests such as music, theater, teaching, art and science into computer science,” Jaoudi said, adding that he would rather not write code for the rest of his life.

Jaoudi may not know exactly what he will be doing in the future, but his passions and array of interests will undoubtly lead him to success.