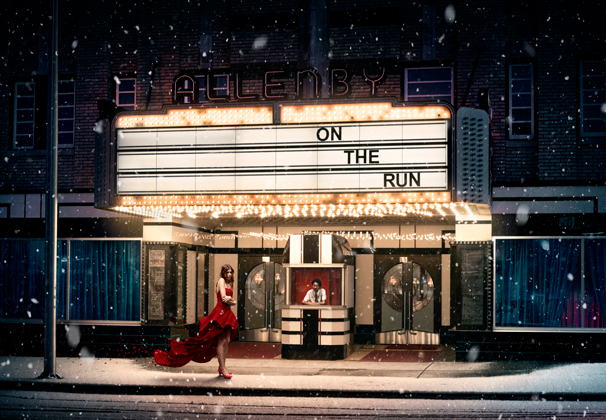 Click for more photos from the In Pieces exhibit.

For contemporary artist Nathan Sawaya, who graduated from the NYU School of Law in 1998, Lego bricks are much more than toys.

In his latest exhibit In Pieces, a collaboration with Australian hyperrealist photographer Dean West, Sawaya works to prove that Lego blocks are an expressive artistic tool equal to any other medium.

“There are a lot of restrictions that come with using a toy as an art medium,” Sawaya said, “Personally, I think there’s a lot of freedom. I think there’re endless possibilities of what can be done [with] this brick.”

The exhibit, which opened on March 1, features seven of West’s photographs. The images show different landscapes such as a countryside train station and an indoor swimming pool. The photographs are presented alongside 11 large-scale sculptures built entirely out of Lego blocks. Trees and clouds populate the gallery, as well as pieces that explore themes of nature, society and identity.

“It all started because we thought there’s a lot of synergy behind the way Nathan built the sculptures and the way a digital photograph is constructed with the pixels,” West said. “We called it In Pieces for two reasons. One, the way it’s constructed layer by layer, brick by brick, and two, a reflection of the characters in the scenes. The whole concept really stems on how we build our identity.”

Sawaya and West drew inspiration from each other’s artistic styles and worked together to create digitally composed, stylistic images that incorporate Sawaya’s Lego sculptures with West’s photography. The two artists came up with the preliminary concept for the collection after traveling together across North America.

“We were quite nomadic about the process and just let time run its course,” West said.

Each photograph is composed of elements from different visually captivating cities. The light, pastel color palette of the scenes calls to mind the perfectly composed American postcard image.

A standout photograph depicts a woman wearing a red dress, composed entirely of Lego blocks, standing in front of an old-fashioned movie theater in the snow.

“I think each photograph kind of tells its own story,” West said. “I like to refer to the images as open-ended dramas.”

The idea of using Lego blocks as a medium for realistic sculpture originated from Sawaya’s experiences with them as a child. Unlike using other more traditional media, like clay or metal, sculpting with Lego blocks presents certain challenges, but also makes for a unique aesthetic.

Steinhardt freshman Jennifer Lu was amazed by the complexity of the Lego sculptures.

“I thought the exhibit was really innovative,” Lu said. “I never thought you could do so much with Legos.”

In Pieces will be on display until March 17 at the Openhouse Gallery, 201 Mulberry St.

A version of this article appeared in the Monday, March 11 print edition. Deeksha Mehta is a contributing writer. Email her at [email protected]