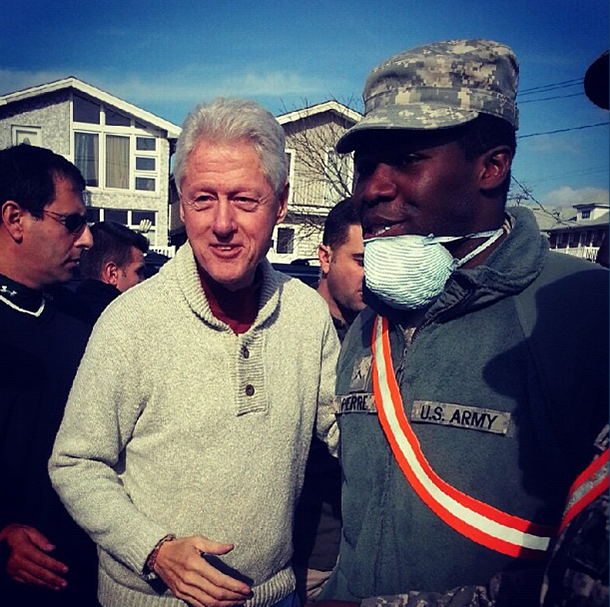 While life after Sandy is back to normal for the NYU community and much of lower Manhattan, hundreds of people are still without basic necessities.

“It’s been very difficult,” said Alen Schlesinger, 62, a resident on 142nd Street in Rockaway, Queens, as he stood in his den, which was cluttered with boxes of his family’s possessions. Schlesinger’s home is among many in the Rockaways that has been without electricity and heat for three weeks.

To assist Schlesinger and hundreds of other families in similar situations, the Clinton Foundation and Clinton Global Initiative organized a Day of Action on Sunday. According to a press release from Chelsea Clinton, CGI’s goal was to acquire 1,000 volunteers to make a difference in areas that continue to suffer from the effects of Sandy.

NYU provided about 70 volunteers and also served as a meeting place for several hundreds of volunteers to get organized. About 15 buses transported the volunteers from outside Bobst Library to the Rockaways. They participated in a number of different projects, including park cleanups, distributions of coats and other materials, serving meals and canvassing the neighborhood to assess the situation and to provide necessary information to residents.

“CGI reached out to organizations and colleges [and] universities from throughout the region to collaborate with them on this initiative,” said Diana Lugo-Martinez, program administrator of NYU’s Center for Student Activities, Leadership and Service, in an email.  “They called our office and asked if we wanted to help, and we said absolutely.”

Long Island resident Liz Lattanzio, 42, said she is not exactly sure about the situation back home.

“But these people need help, so I felt like it was the right thing to do,” Lattanzio said.

CAS sophomore Jeremy Lakin said he felt a need to help with relief efforts after he was affected by the hurricane in many ways. Not only did he have to evacuate from his residence hall during Sandy, many of his family members and friends also went through rough times during and after the storm.

“My home in Pennsylvania was hit. My friends and family in [New Jersey] were all hit,” Lakin said. “I have a friend who actually lost someone in the hurricane, so I wanted to help out with the relief efforts.”

Volunteers at the Day of Action even included tourists.

Hasan Aydin, 22, who is from the Netherlands and had been in New York for about a week, said he wanted to do what he could to help after his friend told him about the event.

“I wanted to do good things for New York,” Aydin said. “It looks like a really big mess out there.”

Once the volunteers arrived in Queens, they witnessed the devastation that could not be seen in Manhattan.

Rozelyn Chok, 23, a Juilliard student, said she was shocked by the difference between the situation in Manhattan and in Queens.

“We saw an entire house just gone, like tipped over,” Chok said.

Destroyed houses, filthy streets, sidewalks covered in sand and huge piles of garbage and ruined possessions along the sidewalks were some of the sights in the Rockaways. On nearly every block, groups of volunteers from numerous organizations were helping in any way they could.

“The volunteers have been terrific,” said Rockaways resident Tim Tully, 54. “All the different groups, the Army, everybody’s coming around and they’re wonderful. They really are.”

Volunteers from Sunday’s Day of Action said they hope that their efforts made at least a small difference in the lives of the Queens’ residents.

“For a lot of the people we talked to, I think it was just helpful for them to know that people know they exist and know they need help,” Chok said.

A version of this article appeared in the Monday, Nov. 19 print edition. Nicole Brown is city/state deputy editor. Email her at [email protected]