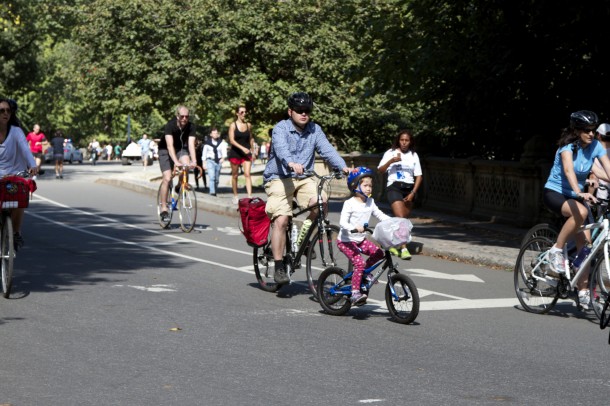 New York City’s Department of Transportation announced its plans to redesign the traffic lanes in Central Park last month, in hopes of improving safety for pedestrians, bicyclist and drivers alike. The project will create one full lane each for jogging, biking and driving.

The proposed design will widen the biking and jogging lanes. In the upper loop and part of the lower loop of the park, the pedestrian lane will double in width, increasing from seven to 14 feet. One of the current 11-foot driving lanes will become a bike lane, which will also be divided into a slow and a fast lane. In the other parts of the lower loop, the lanes will be slightly smaller, but throughout the whole park a new barrier will divide the pedestrian and cyclist lanes. All of this will make each lane more even.

Additionally, cyclists will no longer be permitted to change lanes during car-free hours due to the confusion in lane shifts.

There are currently three lanes that run through the park, each of which are different widths. The amount of different vehicles can cause a considerable amount of congestion, and collisions have become increasingly common.

CAS sophomore John Valiplackal, a frequent runner in the park, supports the separation of the biking and running lanes.

“I feel that the conflict between runners and bikers is the biggest safety concern for both parties,” Valiplackal said. “[P]utting in this separation between the bikers and runners will make Central Park way safer for all those who come out to the park to stay active.”

The DOT affirms that this plan will lessen the congestion between the three lanes. According to a press release by the DOT, these enhancements are based on similar lane configurations installed earlier this year in Brooklyn’s Prospect Park that have successfully reduced conflict among park users.

“Central Park is New York City’s recreational oasis, and this redesign will provide park visitors with safer and wider paths to walk, jog or bike,” said Parks and Recreation commissioner Veronica White in a press release.

Richard Bernstein, a blind man, was hit in the back by a cyclist while crossing a crosswalk in Central Park almost two months ago. He said even though the plan is a good start to improve safety, there is still a problem with the safety and accessibility of the park, especially for those who are blind.

Bernstein added that he still has a problem with the plan. He posited that the biggest issue in the park is the cyclists who do not stop at the stoplights.

“It’s impossible to cross [the street] because the cyclists aren’t required to stop at the stoplights,” Bernstein said.

A version of this story appeared in the Monday, Oct. 8 print edition. Nicole Brown is a contributing writer. Email her at [email protected]