Even without a writing staff, this NYU satire publication still has a voice. 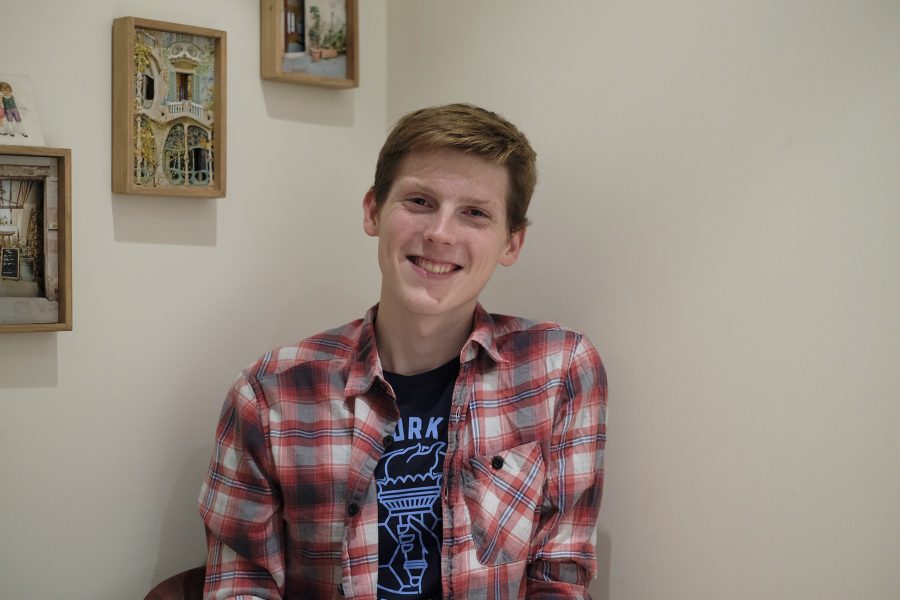 Junior Travis Schmidt is the Chief Campus Manager at The Black Sheep NYU – which recently cut its writing staff. (Photo by Natalie Chinn)

The Black Sheep NYU is in limbo. The digital satire publication’s writing staff was recently cut by The Black Sheep Online’s national headquarters in an effort to focus content on social media platforms.

Though the publication is no longer producing written articles for its website, its team is moving forward with purpose. The site’s social feeds, especially its Twitter account, remain active, and the Black Sheep’s archives are still available.

The change won’t just take place at NYU. The Black Sheep NYU is part of a national network of other Black Sheep publications. Each campus has a team of content creators that reports to the national corporate headquarters in Chicago.

“Take [The Odyssey Online] in terms of format — not in quality, we’re better than that — and then take The Onion in terms of content, put those together, and make it college-oriented and that’s what you get,” Chief Campus Manager and Steinhardt junior Travis Schmidt said. “It was fantastic because it allowed content to be diversified to each campus.”

The news of the publication’s pivot to video and social media came from national headquarters in mid-October, according to Schmidt. The team at NYU was given one week to cease editorial production. Schmidt hasn’t published a new article since Oct. 15.

The cuts — including Schmidt’s current position, for which he receives a weekly stipend — weren’t out of the blue. When Schmidt joined The Black Sheep as a writer when he was a first- year, the publication was mainly focused on written satirical articles. Over time, corporate began to tell campuses to cut down on the number of writers they brought on, even though the writing staff was unpaid. This semester, there were only two. The cuts weren’t due to a lack of interest on campus, Schmidt said. Instead, it simply became too expensive to maintain a wide network of writers; website and server maintenance, used to host the writers’ content, was costly.

The structure of The Black Sheep allowed each campus to develop its own voice and content catered to its audience, The Black Sheep’s brand of satire was tied to traditional campus culture and climate — and NYU is simply a very different kind of campus.

“While most schools could thrive on mocking Greek life, how terrible one quad is, or the latest antics of their horrid sports teams, we could not,” Schmidt said. “It isn’t because we don’t have these things, but because the culture does not exist here.”

According to Schmidt and Kim, corporate has asked they focus on generating memes for their social media platforms and man-on-the-street videos for YouTube. The latter illustrates the quirky aspects of traditional university life. However, these types of videos only touch on on superficial characteristics of students, which isn’t what Schmidt and Kim want The Black Sheep to focus on. Instead, they’d like to see satire used as a way to create meaningful discussions about systemic issues at NYU.

“Video has gone the way of entertainment instead of satire, and I think that’s another thing that a lot of the staff has beef with — is that we’re not doing satire anymore,” Kim said. “We’re now saying, ‘Hey, what’s the strangest thing you’ve seen someone wear in New York?’ It’s more memes than [satire].”

To avoid this, Kim wants to focus on sketches, which he thinks are a better platform for satire. He thinks NBC’s Saturday Night Live is a good example of how satire, in sketch form, can offer insightful interpretations of current events. But sketches are hard to produce on an SNL level, especially when you have limited resources — such as a lack of producers, actors and comedy writers. It is also hard for the team to create video content with made-up quotes that are often found in satirical articles.

“You can write Andy Hamilton into an article, but you can’t interview him [for a video] and say things that he didn’t say,” Kim said. “You can do that in a satire piece, but you can’t do that in video. Satire’s easy when you can make it up.”

That’s why Schmidt and Kim value written satirical content so much.

“There was no need to get the facts necessarily straight,” Schmidt said. “But instead offering the interpretation of everything that was going on, which was incredibly helpful for allowing a very genuine, very earnest discussion to transpire.”

Just because the written content is gone doesn’t mean The Black Sheep is gone. Kim thinks that a new focus on social media content could work really well for NYU’s online community.

“I think people have really taken a liking to our Twitter and to our Instagram and social media — that’s where the NYU community really thrives, is online,” Kim said. “We’re not so much a physical university [community], we’re online.”

And Schmidt thinks that as long as the audience wants satire, the outlet will be there. Right now, there is talk about forming a new independent satire publication at NYU, but nothing is concrete.

“I think [The Black Sheep] will survive, in some form or another,” Schmidt said. “Like the rest of journalism, be it satire or traditional reporting, it’ll find a way to adapt and overcome the circumstance. People clearly have an interest in this kind of content, and because that interest is there, viewership will remain.”

Paul Kim is a copy editor at WSN.

A version of this article appeared in the Monday, November 5 print edition.