Review: ‘If I Can’t Have Love, I Want Power’

Halsey navigates life in its rawest form through their new concept album. 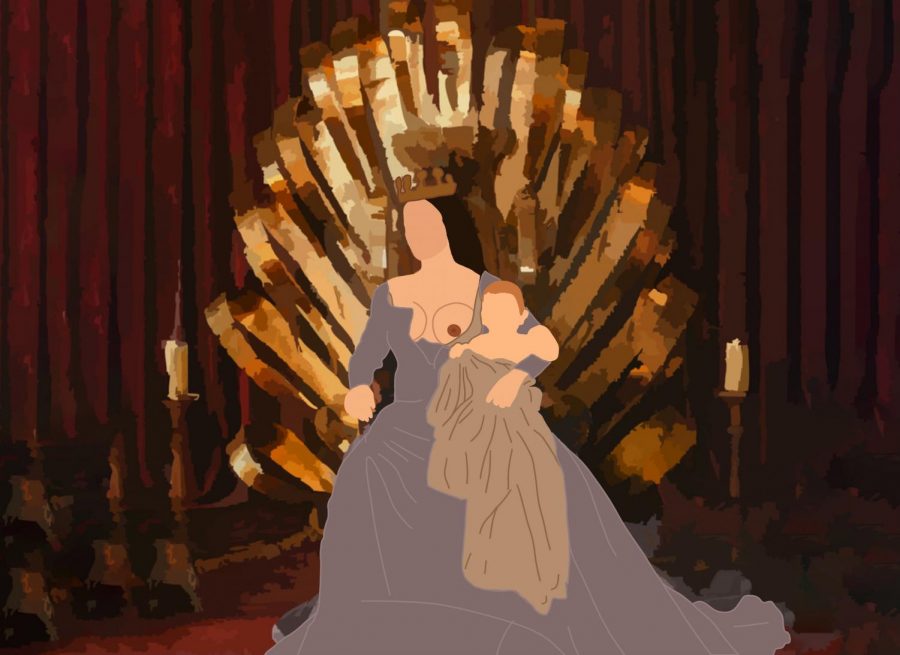 Singer-songwriter Halsey released their fourth studio album, "If I Can't Have Love, I Want Power," on August 27, 2021. Halsey tackles femininity, empowerment, pregnancy, and motherhood all at once in their new concept album. (Staff Illustration by Manasa Gudavalli and Arnav Binaykia)

“It’s the most inadequate I’ve ever felt.”

Halsey shares this in a 2020 interview with the Guardian, discussing the online backlash they received following their public miscarriage in 2015. They continue, “Here I am achieving this out-of-control life, and I can’t do the one thing I’m biologically put on this earth to do. Then I have to go onstage and be this sex symbol of femininity and empowerment? It is demoralising.”

As it turns out, Halsey can tackle femininity, empowerment, pregnancy and motherhood all at once, doing so in their fourth and latest album, “If I Can’t Have Love, I Want Power.”

The singer announced the concept album on Jul. 7 via Instagram. In the caption, they explained it would be “about the joys and horrors of pregnancy and childbirth” and explore the “dichotomy of the Madonna and the Whore.” This dichotomy, however, is never approached directly throughout the 13-track album. Rather, it is expressed through the juxtaposition of Halsey’s personas, brought out through a masterful interplay of distorted sounds and lyrical prowess.

Halsey opens the album with the soft piano ballad, “The Tradition.” Powering the song with their euphonious yet gritty vocals, the singer goes on to explore themes of female empowerment and exploitation in the music industry. “The Tradition” is a confirmation of societal standards where men can “take what [they] want, take what [they] can” under the guise that boys will be boys, a phrase used all too often to defend poor behavior by men. Be it intentionally or unintentionally, those guilty of deploying it help uphold the patriarchal system that has oppressed generations.

Halsey acknowledges this in “If I Can’t Have Love, I Want Power.” Whether the album serves as an active call to dismantle the patriarchy or simply to highlight its shortcomings, one message is clear: fight for what you believe in. Fight for what you want. The singer demonstrates this in “You asked for this.” Over pop-punk production reminiscent of the 2000s  — think big drums and distorted electric guitar — Halsey sings, “Go on and be a big girl/You asked for this now.” They blame themself, our patriarchal society and its pressures for their own suffering. Then the singer eases up on themself. Chasing after their desires, they admit, “I want everything I asked for.”

This introspection continues in “Whispers.” Through aptly-whispered vocals and a scattered piano melody, Halsey wrestles with mental illness and self-sabotage. “This is the voice in your head that says, ‘You do not want this,’” they sing, “This is the ache that says, ‘You do not want him.’” By discussing manic, self-destructive behavior, “Whispers” explores the struggles of being bipolar. But it also explores a sentiment that will resonate with all listeners: we often lie about what we truly want, ghost the people we like and carry around our emotional baggage when we should really be letting it go.

Having recorded the album during pregnancy and just given birth on July 14, Halsey dedicates several songs to Ender, their newborn baby. Containing only light, fingerpicked acoustic guitar alongside their vocals, “Darling” is a vulnerable lullaby that seeds the trees of love, growth and happiness. “But only you have shown me how to love being alive,” they sing. Another song, “1121,” appears to be a prayer for a safe and healthy pregnancy following the pain of miscarriage. Named 11/21, the day they found out they were pregnant, Halsey begs in the bridge, “Please don’t leave/Don’t leave me in the shape you left me.” Anybody who has struggled with getting pregnant or keeping a child can perhaps relate to “1121” and its impactful lyrics.

In an album about internal conflict and self-reflection, the final song “Ya’aburnee” is a comforting bright star in the dark night sky. An Arabic term expressing the hope of dying before their loved ones — “You bury me” — “Ya’aburnee” finds Halsey singing to their baby about the love they possess for them. They realize that all the sacrifice that comes with pregnancy and childbirth is worth the certainty of creating a legacy, of loving each moment with their child during their short time on Earth. There is a delicate wholeheartedness in the ending that gives “If I Can’t Have Love, I Want Power” a full-circle moment of recognizing the beauty of impermanence and imperfection — a beauty powerful enough to create new beginnings and new life.